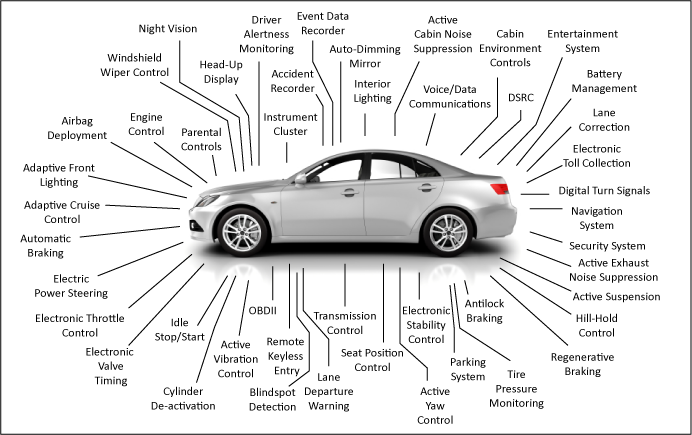 What Design Engineers Should Know About Procurement in Automotive Electronics

If there’s one take-away from my recent visit to the 2014 Canadian International Auto Show, it’s that the automotive industry is one of the most glamorous and innovative industries in existence today. Along with computing and electronics, the automotive industry is consistently at the top in terms of R&D spending, according to statistics from the management consulting firm Booz & Co. As cars continue to incorporate more electronics, it’s certainly an exciting industry for electronics designers to watch.

Advanced engine control units, electronic stability programs, driver assistance systems, instrument clusters and infotainment systems are only the tip of the iceberg in terms of how electronics play such a pivotal role in cars. What most people don’t realize, however, is that while most of these electronics products are specified and integrated by the automotive companies, they are often designed and developed in collaboration with the innovative design engineers at their suppliers.

In electronics,  most of the procured items are major complexity procurement, which means there’s a significant level of novel technology, tools, processes and hence risks and impacts involved in their development. In contrast, COTS (Commercial Off-The Shelf) parts are those which are just bought with no changes (for e.g. nuts, paints, usually even tires). Collaborative efforts between the supplier and the buyer determines the final product performance. The procurement counterpart plays the role of sub project managers to coordinate the product development with the project managers at the supplier end. The relevance is amplified by the fact that in pursuit of competitive excellence and continuous improvements, many projects run on constrained project resources and outstretched project targets which neither of the teams may have achieved before.

1. Features Vs Costs: While a designer’s priority is most often regarding the product features and performance, a buyer’s main focus will be on making it possible within development and part budgeted costs available for the project. A mismatch could often happen when the marketing and product planning team has a vision for which the designer designs, but has an inadequate budget estimation to support the product. Features may also have to be cut down later on when there are integrated cost reduction projects. On the other hand, a buyer’s performance is sometimes even tied to the amount of value-added savings he can produce from the estimated budget.

2. Late Change Requests: The milestone of ‘Design freeze’ before development should ideally be the end of story for design changes. But issues crop up during systems integration and prototype builds. Change requests late into development can cause exponential costs. The question then becomes if it should be a half baked product within the cost and time constraints or a delayed and expensive fully functional product. The effect is most prominent in aesthetic components where injection molds may be involved, such as in the case of headlamps.

3. Troubles on Parallel Projects: Procurement teams can also be notorious for temporarily stifling a project because of supplier issues on parallel projects for commonly derived and transferable benefits. This delay may actually be a big chip for negotiation with the supplier to get better deals though it may rub project team members the wrong ways.

4. Dealing with Monopolies: Some of the biggest electronics suppliers can also be monopolies. Dealing with monopolies/long term single sources when they have all the leverage in negotiation is hard, and often strategic decisions may have to be made which wont be quite popular. This is more frequent nowadays in new development projects such as electric, hydrogen or fuel cell applications.

5. Mismatch in Communications: Procurement team often insists that all communications to suppliers, especially regarding any changes to previous understanding of scope has to happen through them. Designers often see this as a bottleneck. Only a separate sourcing or pricing team is usually exempt to this channel. Internal bypassing of communications through to the suppliers can often send mixed signals in priorities and smart suppliers can really take advantage of this situation.

6. Supplier Ethics & Management: Suppliers may not often have the same process standards as those that automotive companies have and in such cases it becomes imperative to develop these standards or characteristics in them for longer term benefits. These might not necessarily be an issue when there’s sufficient competition within the targeted markets, but it’s when the supplier panel is limited. A transferable knowledge of supplier manufacturing and management processes, as well as best industry practices can ensure hassle-free development.

7. Delayed Delivery: Regardless of a perfect product conforming to specifications, project delivery can always be delayed due to other reasons such as poor management at suppliers end, internal political conflicts, labor issues, delayed payments, for-ex fluctuations, tier-2/tier-3 level suppliers issues, logistics etc. Yes, a good buyer has to foresee and avoid all the risks involved. But just as unanticipated issues would statistically occur in novel design, the same does occur among suppliers, and some of these are unforeseen risks that could not even be simulated.

When it comes to supplier management, it’s more of an art than science, and most premium companies knows that a good business relationship is required for long term sustenance and growth.

As a design engineer, having an understanding of the challenges that procurement professionals face will make the project team’s job efficient on both sides, allows for better project planning, development processes, risk management, collaborative teamwork and ultimately more efficient project performance.