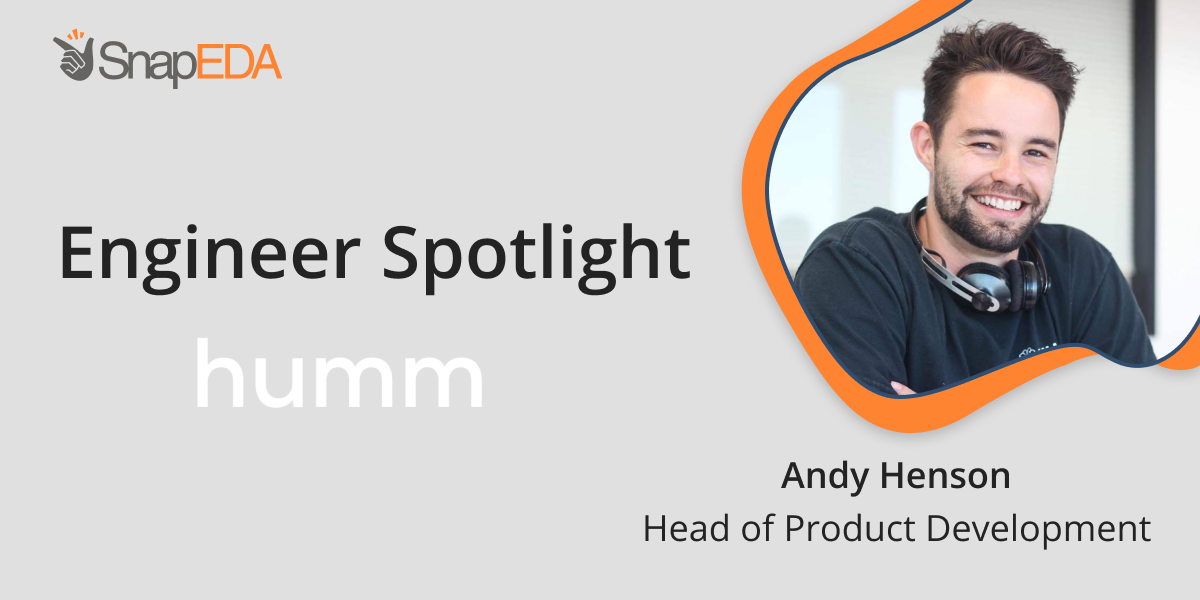 Using electricity to stimulate the brain: An interview with Humm’s Head of Product Development

Have you ever wanted to boost your focus for greater productivity and alertness? Humm is a hardware device that uses tACS (transcranial alternating current stimulation) with the aim of improving working memory. Their goal? To help people learn things faster – whether it’s a new programming language or musical instrument. Among their early customers is the United States Air Force which intends to use the device for pilot training. We spoke to Andy Henson, Humm’s Head of Product Development, to learn more about Humm’s engineering processes.

Hi Andy, thanks for meeting us today. Can you tell us about yourself and how you got started with Humm?

Andy: Sure. I’m originally from Perth Australia, and did a double degree in Mechatronics and Arts (Indonesian Major) at the University of Western Australia (UWA). During my time there, I was involved on the motorsports team, where we built the first electric car from UWA to compete in a national competition.

After graduating, I co-founded a software startup and spent time in engineering management. But I quickly realized that I prefer to be directly building and prototyping hardware.

That led me to joining Humm to lead the hardware development. Shortly after joining, we were accepted to the Berkely Skydeck accelerator and moved to the U.S., where we are now based.

Tell us more about Humm

Humm is a single-use hardware device that adheres to your forehead and electrically stimulates your brain to increase attention and learning. Our mission as a company is to bring electric brain stimulation to everyone.

The company was started at UWA, where one of the founders – Dr. Tim Fiori – was doing clinical research on TMS (transcranial magnetic stimulation) for spinal cord rehabilitation.

Although the technology has been around for decades for rehabilitation, there is a growing body of research showing how it can be useful for healthy brains and people. The founders realized there was a big opportunity to take this technology out of the lab and to consumerize it as an accessible product that could benefit everyone. That was the starting point for creating Humm, and we still have that driving motivation today.

One of the biggest benefits of it is that it improves your working memory, which is key to learning. If you memorize a phone number, that’s short term memory. If you then recite that phone number backward, then that’s working memory because you’re actually processing the information. If you have a high working memory, you’re able to learn new concepts faster, recall long-term memories better, and focus more in the moment.

This can be beneficial to so many people in so many different ways, whether you’re learning a new programming language, or a new musical instrument. For example, we’ve partnered with the US Air Force and they’re using our patches to help their pilots in training.

At a high-level, how does the the technology work?

The science related to the specific type of stimulation that we’re doing is TACS or Transcranial Alternating Current Stimulation, which has been around for decades.

To understand how the patch works, think of it as applying a sine wave between its two electrodes. That sine wave creates an electric field able to influence the neurons in the prefrontal cortex, which is the area just under your forehead.

When you apply an external electric or magnetic field, the brain’s neurons become entrained, which means that they start to mimic the effects and the frequency that you’re stimulating at.

Whenever we’re in a focused state of mind, the brain exhibits a certain type of frequency more strongly than it normally would. So, by externally stimulating the brain at that frequency, we can coerce the neurons to be firing in a more amplified way at this desired frequency, and that’s what helps us improve working memory.

In terms of product development, what has been the biggest challenge?

Hardware development is challenging because it requires much more initial capital to get the idea off the ground, and has a much longer lead time than software. For example, once you’ve submitted a PCB, you can’t just go update it and recompile everything instantly.

Another challenge has been simulating the design. With rigid designs, there’s a suite of tools to measure things strength, bending, yield stresses, etc… However for us, the key design elements are flexibility, adhesion to the skin, and durability. These elements are more difficult to simulate in software, so we’ve needed to do a lot of in-house prototyping and material testing to ensure these patches will be able to stick to everyone’s forehead.

And finally, the nature of the device itself makes it extra-challenging. This is a single-use hardware device. After our customers use the patch they send it back to us, but we can’t guarantee they’ll always do that. This means that we have to do all of this hardware development in a very cost-effective way so that when we deliver the product to our customers, they are paying a fair price.

On the PCB design side, which tools do you use to design the circuit boards and why?

Our PCB design isn’t the most complex. We don’t have high levels of current flowing and we don’t have a huge amount of functionality (since it’s a single-use device that only needs to be applied for 15 minutes).

So our challenge has not been on making an extremely high-performing, long-lasting device, but rather, a device that safely delivers a high-quality electrical signal at the most affordable price possible.

From that perspective, Eagle made a lot of sense: it was much more cost-effective than other tools, with the added benefit of the integration it has with Fusion360, which allows us to leverage 3D models and speed up the mechanical development process too.

So it sounds like 3D is important in your PCB design process?

From the beginning, whenever I did PCB design, I always made sure that I had 3D components for everything.

3D models are really helpful in terms of being able to see if the components are sitting on their pads the exact way that you thought they would – it’s another layer of checking quality.

But also, they’re great in terms of communication: when I’m communicating to the rest of the team that the boards are coming, or if we want to make a slide deck for investors to show our progress, it’s a great way to show a design is coming along.

How do you think electronics will change our understanding and usage of the brain in the next decade?

I believe people will start embracing and understanding that electricity and energy are the language of the brain. For our entire history, humanity has been looking at ways to influence our brain or mental state to find more motivation and focus, for example, with chemicals like caffeine.

Rather than look at chemicals, my prediction is that in 10 years, people are going to start to look at electricity, magnetic fields, and infrared light to get a similar effect to the brain as the chemicals have.

We seem to have implicitly accepted that chemicals are an okay way to influence the brain. But every chemical has side effects, even caffeine: you crash and feel tired a couple of hours after you’ve had a coffee. So I think there’s going to be a big change in the perception of how we view the brain, and an openness to try new things.

What advice would you give to engineers who are just starting their careers?

We’ve got exciting things coming at Humm. We have over 1000 pre-order customers and we’ll be launching in the first quarter of 2021. Check it out at thinkhumm.com.