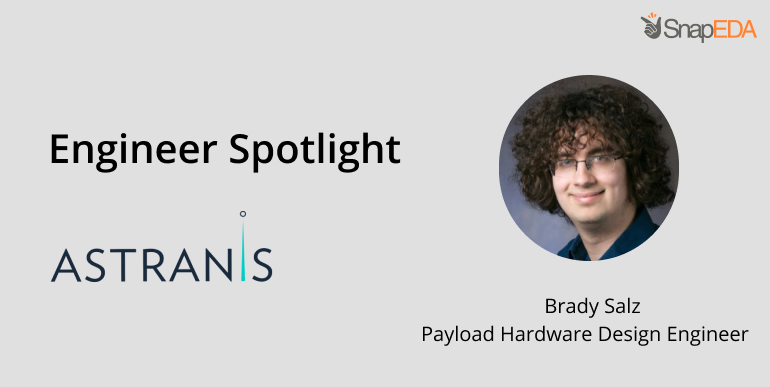 A satellite engineer explains the challenges of space electronics

Whether it’s surviving a turbulent rocket launch, or warding off radiation from the galaxy, Brady Salz of Astranis explains some of the unique challenges of designing printed circuit boards (PCBs) for space.

Hi Brady, you’re a hardware engineer at Astranis. Can you tell us more about what you’re working on?

Brady: Sure! At Astranis, we’re building geostationary satellites – which means they’re satellites that stay at the same point above the Earth. In doing so, we’re providing Internet to people around the world who don’t have access today.

There are lots of regions in the world where it’s harder to use fiber optics or cables underground to route place to place. Rural Africa, or mountainous regions where it’s difficult to do construction, would be a couple examples.

Although satellite internet is not a new phenomenon, it hasn’t been widely adopted yet because it’s still insanely expensive. That’s concerning because the people that can generally benefit the most from it are often less well-off and can’t afford it. This is where our satellites come in. Our satellites dramatically lower the cost, and help get all those people connected.

Why is satellite internet so expensive, and how does your technology lower the costs?

Brady: It’s so expensive due to the historical approach to it!

Traditional geostationary satellites have enormous lifetime requirements – up to 20 years or more. You can’t go up there and replace parts after they wear out, so you need to guarantee reliability over a very long time. That dramatically raises the cost.

Also, traditional satellites are huge, the size of a double-decker bus. That means you need a powerful rocket to get it there, and those don’t come around too often. It’s a bit of a positive feedback loop where this leads you to build a larger and more-featured satellite, because who knows when the next chance will be.

Our approach relies on modern, smaller satellites. With each satellite, a whole region gets reliable access right now – no delay, and nothing to be maintained. There is a lot of great new technology that is helping to bring the cost down of each satellite. And thanks to massive improvements in the launch industry, the cost to get a satellite up is getting cheaper every day.

Technically speaking, what makes the satellites you’re working on interesting?

Traditional satellites use hardware-defined radios that can only connect to specific frequencies and only those frequencies. This means that if you ever want to use a different frequency spectrum, you’d have to totally re-design the satellite, which is obviously impossible to do once the satellite is in space.

We’re able to support a huge range of frequencies and modulations, and change those things even once the satellite is in space.

Our approach is different because we’re using a software-defined radio. As a result, we’re able to support a huge range of frequencies and modulations, and change those things even once the satellite is in space. It’s an exciting idea because you don’t need to re-design the spacecraft for any one customer. Of course, it’s significantly harder to achieve this, which is where the design challenges come in.

I’ve heard that space electronics have very specific challenges. Can you share how designing electronics for space is different?

Brady: Space is the ultimate harsh environment. Things shake around a lot on launch, and face extreme temperatures once they get on orbit. Of course, these things happen other places too, such as in the automotive industry, but in space a few things change.

For example, just say you were working on a big server rack on Earth which uses a lot of power. You could easily get a very big fan to blow the heat away. But in space, it’s not so easy. Because space is a vacuum, you need to find other ways to dissipate heat, such as through conduction or radiation.

There are also other phenomena, like bit flipping, where things can get into a state that you wouldn’t have thought was possible. This happens because of various radiation sources. Considering that satellites are up in space for 10 to 20 years, they understandably get hit by a lot during that time.

There are also other phenomena, like bit flipping, where things can get into a state that you wouldn’t have thought was possible.

We make sure that the satellite has sufficient shielding between the spacecraft body and the electronics to reduce the energy that get into the electronics, but it’s never enough. You need to design the system to be robust to any kind of transients!

What about component selection? Does space affect how you choose parts for your designs?

Brady: Yes, it is extremely important. When selecting components we have to ensure that the parts can perform reliably in an environment with radiation. You can bin “reliability” into two types: destructive and non-destructive. If an IC latches up and burns itself out, there’s no going back and replacing it. Then there’s non-destructive: sometimes bits flip in memory, or maybe the processor decides that 2+2 is 5 today.

To make it even more difficult, radiation is a very stochastic effect. If you could very precisely shoot a bunch of atoms at every single part of a chip, we could say ‘Ok this much energy is required to cause an upset of this type’. But it’s pretty hard to precisely shoot atoms in the real world. We go to radiation facilities and put the components in a radiation beam to test to get some kind of averaged susceptibility and probability curves. We combine that with other space modeling tools which allow us to get insight on our expected radiation performance during a mission.

We can then see how much reliability and overhead we need to design for if we had, for example, like a solar flare every week. It allows us to gain insight into the ultimate question: ‘how do we know our failure modes and propagate them up to a system model.’

Are there any components you wish existed?

Brady: The first response of any space engineer would simply be more radiation hard parts!

Since the parts we select must be radiation hard, or radiation tolerant at the very least, it makes finding parts very difficult. Due to market and government reasons, radiation hard parts generally lag the state of the art by about 10 years or more.

What tools do you use for PCB design and why?

Brady: We use Altium for schematic and layout, and a whole lot of simulation and modeling tools outside of that. I like Altium because, generally, it has good linking between the schematic and the layout. The backward and forward synchronization is really critical when you’re doing complex designs that need to interact with other programs and teams.

Prior to Altium, we were using KiCad. Personally, I love using KiCad for all of my personal projects. CERN does some great work, and their latest V5 release is awesome! Altium has some features that we need for work, but for hobbyist and after hours stuff, I strongly recommend KiCad.

Of course, tools like SnapEDA made the switch super easy. Turns out creating a software-defined radio requires some pretty large chips with massive pinouts (1000+) so it has been a massive schedule saver.

There’s also so many other tools you need to design a cutting edge system nowadays. We have a lot of other tools in the chain. You need circuit simulation/SPICE tools before you even think about a PCB: LTspice and ADS are our favorites. Then you need to think about what those electrons are going to do in real life – ideal wires don’t exist. Tools like HFSS and SiWave are critical for verifying any of our high frequency components. It’s great that you can export and simulate your PCB models and gain some confidence in your design.

Don’t think I’m going to stop crossing my fingers when my design gets on the lab bench for the first time though!

What inspires you in your work?

Brady: I love space because it’s one of the few areas left where, as a EE, I can touch almost every part of the stack and learn to understand the whole system.

I love space because it’s one of the few areas left where, as a EE, I can touch almost every part of the stack and learn to understand the whole system.

You need to know the impact of every single gram and Watt, and how it all translates to system level uptime.

We’re enabling people to reach their full potential by bring them Internet access and that’s really inspiring for me. On the other hand, they also get access to Twitter –- you win some, you lose some.

Do you have any advice for engineers who want to get into the space industry?

Brady: What I’d recommend is to learn as much as possible about device and semiconductor physics. There’s a big push going on everywhere now to really understand what failures modes we can expect, how to design around them, and how they trend with process nodes.

For space, the more breadth the better. I’ve never regretted knowing how my designs interact with someone else’s. Mechanical stability, thermal design, fault tolerance, system effects, you name it!

Brady: At Astranis, we’re currently hiring across the entire stack. We’re especially looking for RF/microwave, high speed signal integrity, power, avionics, and software engineers. If this sounds interesting to you, check out the openings and apply here: https://jobs.lever.co/astranis. Or reach out to me directly at brady at astranis dot com.